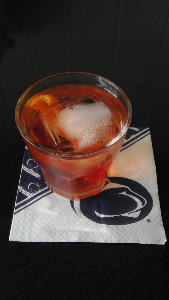 I thought these were ThunderCats napkins...

The Old Fashioned is just that, old fashioned. It's simple, a classic, and fucking perfect. Most bars make them wrong, but a few make them very well, and you can too. The homemade Old Fashioned is the best kind. It's one of my three favorite cocktails, and since I'm watching Mad Men, it seems an appropriate choice for tonight's post.
This version isn't much different, except that I used coconut syrup instead of a sugar cube. You don't get to do any muddling, but there is still a bit of ritual involved. Some bartenders will muddle an orange slice and a cherry in the glass. Don't do this. It's way too sweet and it's gross.
I'm not totally convinced that coconut sugar is that much better for you than table sugar, but it seems like it and I have some, so I'm going to keep using it. Also, it has more flavor to it than plain sugar, a little caramel-ish, kind of like dark brown sugar.
2 ounces rye whiskey (I like Copper Fox)
2 dashes bitters
1 barspoon of coconut syrup
Soda water
The coconut syrup I have is pretty solid at room temperature, so after putting in the glass I splash some hot water in to dissolve it. Once it's dissolved, tilt the glass and rotate it to coat the glass. Now stick the glass on ice for a minute while you fetch the whiskey, bitters, and soda water.
Now add the bitters, whiskey, some ice, and fill the glass with soda water. Stir, and garnish with a large orange peel and if you have one, a bourbon-soaked cherry (I'll write about those, later). Leave the stirrer in the glass.